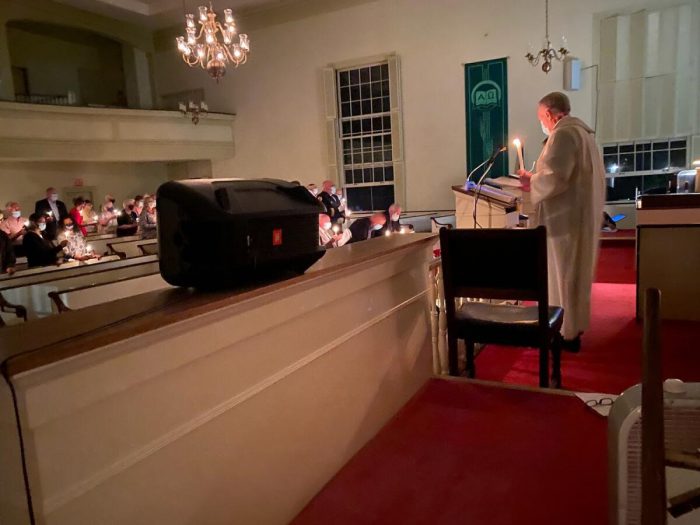 In addition to the Interfaith Prayer Service in Washington, DC, at 3 pm on Sept. 11, promoted by our JPIC Commission, the Catholics of St. Mary’s Churches in Georgetown and Rowley, MA were invited to participate in “A Service of Remembrance and Healing,” by the pastor and parishioners of the First Congregational Church, Rowley, at 7 pm, Sept. 21. Rev. Tom Bentley, pastor, welcomed Father Mike O’Hara, OMI., and mentioned that both of them are newly appointed leaders of their churches.  Both were robed and led the joint service.  Twenty of the Catholic parishioners joined forty of the Congregational parishioners.

Joseph Perry, Rowley Selectman,  remembered the three citizens of Rowley who were among the 44 people on board United Flight 93. With Rowley’s population only 1,434 in 2000, the loss of these three citizens was felt by the entire town.

After the opening prayer by Pastor Bentley, Father Mike led the “Invitation to Remembrance.” Hymns included “America the Beautiful,” and “Let There Be Peace on Earth.”  “A Time of Sharing,” by Michael Wilbur, retired lieutenant of Ladder Company 27, Bronx, NY was very moving as he explained how his ladder company took the body of Father Mychal Judge, O.F.M., who was the first to die assisting victims at the Twin Towers, to the sanctuary of nearby St. Peter’s Church.

Wilbur related how at first he feared 300 of his fellow firefighters had been killed in each of the Twin Towers, since that is how many firefighters were assigned to assist at each tower.  He was vastly relieved when the number was much smaller.  But the devastation of the event forced him to look for positive signs of God’s presence in the tragedy.

He explained that the firefighters, police and emergency medical personnel saved 30,000 people.  And he gave several personal experiences as he helped at the site in the days following:  people saved by God’s love from almost certain death He concluded, though, by giving the figures for people who died in the subsequent years until now, from cancer and lung problems caused by the fall of the towers.

The service concluded with each person lighting a candle from the Christ Candle on the altar, and Pastor Bentley giving the Benediction:  “May our lives honor the lives of all who have been lost, all who have suffered in the wake of that terrible day.  May we honor them with our eagerness to work for a world in which our lives are not swallowed up in violence, but in which we are set free to be the people God means us to be.  God has not placed us at each other’s mercy, but in each other’s care.  May the spirit of God enlighten us, transform us, and lead us into life. Amen.”