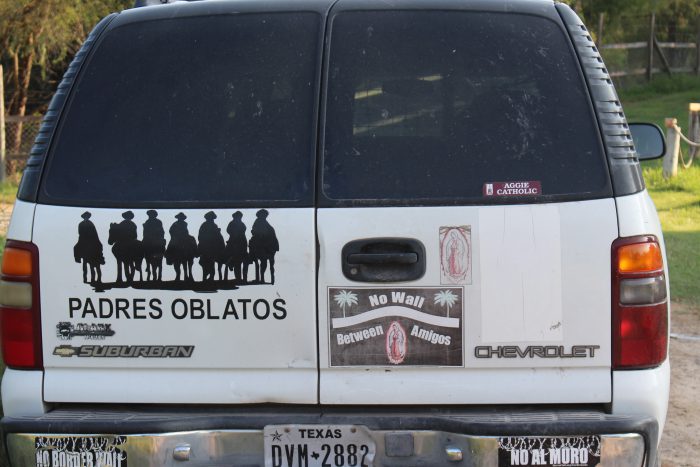 Fr. Roy Snipes’ Chevy Suburban makes it plain who he is and where he stands

In Mission, Texas, Fr. Roy Snipes is pastor of Our Lady of Guadalupe, built in 1899, then re-built in 1926 after a devastating fire the year before. In addition to the Church, Fr. Snipes oversees the historic, La Lomita Chapel just outside of town. It was originally built in 1865 as a place for ranch owners and workers to worship whenever the itinerant Oblate preachers would come for a visit. The first chapel was torn down in 1885 and four years later it was rebuilt on the site where it still stands.

Fr. Snipes has been  ministering on the southern border for his entire 40 years as an Oblate priest, first in Roma TX, and for the last several years in Mission. For much of that time he’s been known for his love of dogs and for his  efforts to rescue strays and in some cases, adopt them himself. 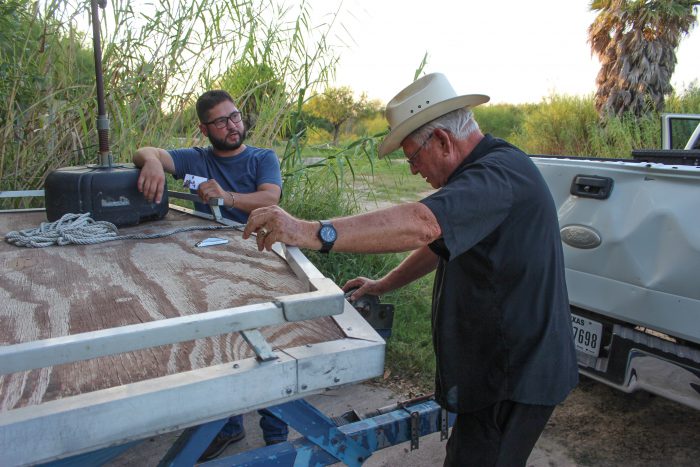 Fr. Roy and his Pastoral Associate, Albert Solis, prepare the boat for launching 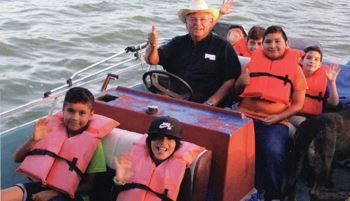 and Lent, First Communions, Graduations, and the summer retreats at “Kamp Keralum”.  The camp, named in honor of the legendary Oblate, Fr. Peter Keralum, is located on a few acres of land right on the Rio Grande River. Fr. Roy invites parish kids and families for special days of reflection, marshmallow roasts, fishing tournaments and maybe even a ride on Fr. Roy’s boat! Though the Covid-19 pandemic made many of their annual celebrations impossible in 2020, Fr. Roy is happy to have things up and running again in 2021, with proper precautions.

Fr. Roy Snipes checks on the donkeys living in the former school yard.

In recent years, they’ve become known for something else: the location of Our Lady of Guadalupe has put them at the epicenter of the ongoing “Border Crisis” and it often takes up much of their energy and resources. Our Lady of Guadalupe’s grade school, now closed, has been used to shelter as many as 300 migrants, mostly families with children, waiting to be processed through the immigration system.  They are sent over by the local Catholic Charities after their facilities run out of space.

As of this writing, the school is empty, but Fr. Snipes expects it will be filled up again at some point. The fenced-in schoolyard is now home to a pair of llamas, couple of donkeys, and some goats. “When they were here, the migrant children were especially fond of the donkeys,” said Fr. Roy. These animals are part of Fr. Snipes well-known menagerie of rescues, mostly dogs, four of whom accompany him wherever he goes, including to Church. 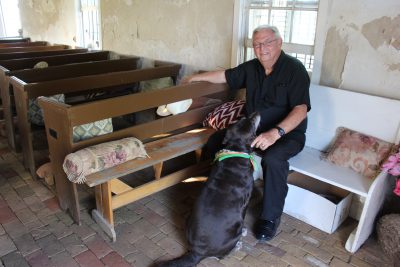 Fr. Roy and Charlotte take a moment to sit in the chapel of La Lomita

Another situation Fr. Roy has to deal with is the ongoing protest against the building of a border wall. As originally planned, the wall would have cut off access to the La Lomita Chapel which sits very close to the river and where Fr. Roy was Ordained. Our Lady of Guadalupe is affiliated with the chapel and Fr. Roy regularly has Mass at the Chapel, weddings and other celebrations. 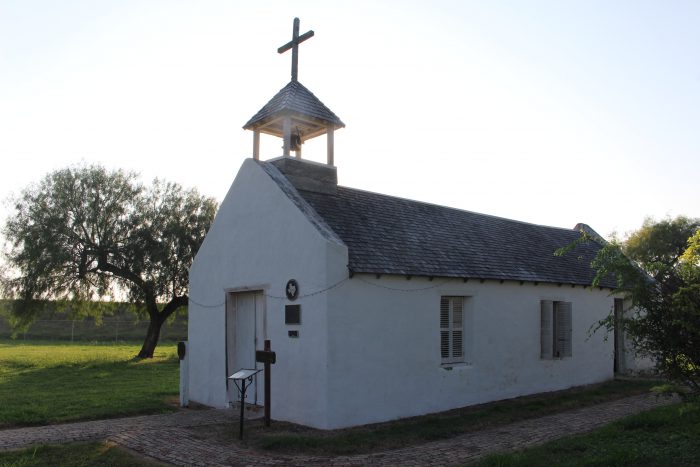 When the migrants were staying at Our Lady of Guadalupe, parishioners would bring items of food and clothing to help out. Fr. Roy doesn’t understand the animosity some feel toward the migrants: “To despise the poor poisons the soul” he says. But he knows not everyone in Roma supports his stance. He recalled when, “Some big men in a big suburban drove up and made it clear they were against what we were doing.” When Fr. Roy went up to the car and invited the men in for supper, it de-escalating the situation. 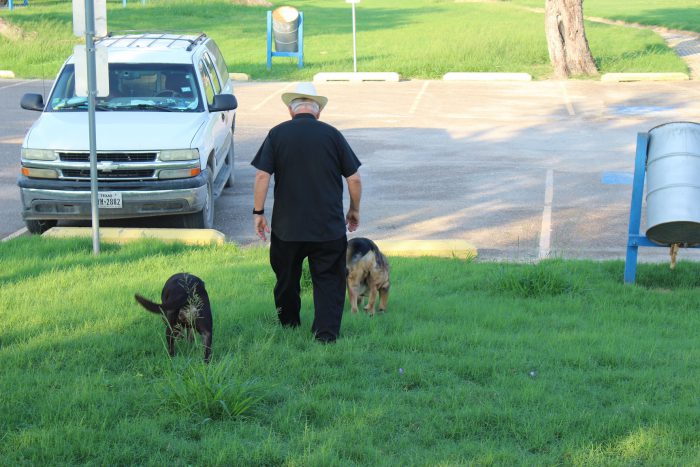 Characteristically dressed in clericals and Stetson, Fr. Roy and his escorts descend the hill where La Lomita Chapel sits

Fr. Roy’s “Cowboy” attire, dogs, and easy manner made him a favorite of national reporters when they covered the border situation. He’s been featured in several stories on network TV, radio and newspapers. He doesn’t seem to completely understand why, but he’s content to let them quote his statements regarding the migrants, all based on the Oblate charism of  love for the “most abandoned.” At 76 years old he’s still willing and able to work for those who society often casts aside.  The sticker on his truck says it plain and simple, “No walls between amigos.”