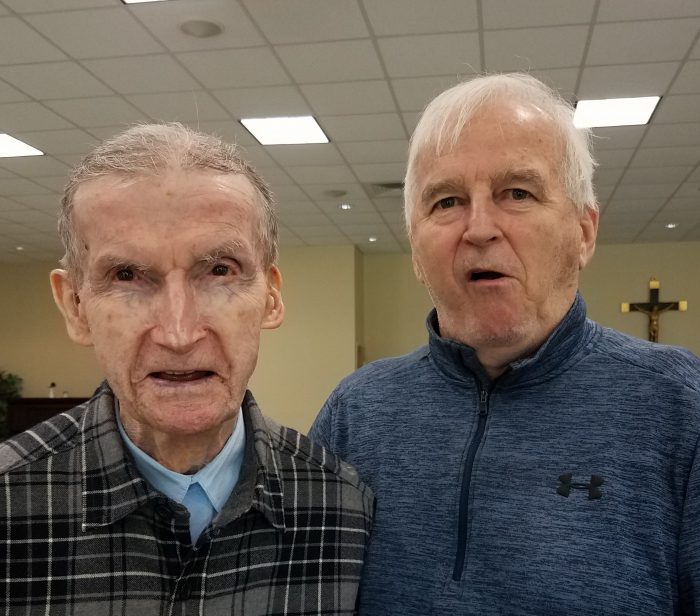 Yesterday I delivered the attached statement to a session of the Asia Development Bank meeting here in Washington.

Last week while in Tewksbury for an area meeting I had the privilege and opportunity to work on my comments through a conversation with Fr. Lucien Bouchard OMI who spent more that 25 years on the island of Borneo (Kalimantan) where the Oblates have maintained a missionary presence since 1977.

Good morning all and thanks for the invitation to speak at the special session this morning. My name is Fr. Séamus Finn OMI and I am the Director of the Justice Peace and Integrity of Creation office for the Missionary Oblates of Mary Immaculate that is located here in Washington DC. I am also the Director of faith consistent investing for the OAP trust fund and conduct many engagements  on a variety of issues, like Palm oil expansion, with corporations that are held in the portfolio of the FUND. I also serve on the board of the Forrest people’s program which is located in Moreton-in-Marsh, a registered Charity in England & Wales.

I’m here to speak this morning on the National Roads Development Project (project #52347-001), in Kalimantan, Indonesia.

Since 1967 consecutive Indonesian governments have sought to develop Borneo’s rich bio- diverse borderlands which separates the states of Indonesia and Malaysia. In 2005 this culminated in the Palm Oil mega project which propose the formation of a 200 km long plantation corridor to span the entire length of the border and to establish the world’s largest continuous oil palm plantation spanning 1.8 million hectares.

In 2016 this project was re-formulated under the auspices of the Integrated Border Area Development program (IBAD) which is supported by the Asian Development Bank through the financing of the national roads project which is referenced above. Frequently during the development of this project the Indonesian government continued to hand out concessions to oil Palm developers without prior consultation with affected communities.

The proposed Road building project will impact districts in East and North Kalimantan, home to numerous DAYAK Indigenous Peoples and some of the islands last remaining intact rainforest. In April 2021, fears that the proposed infrastructure would open up Dayak’s  Peoples lands to large scale commercial exploitation prompted the United Nations to again call on the Government of Indonesia to adopt safeguards and I quote  “to secure the possession and ownership rights of the local communities before proceeding any further” with this project.

The flawed implementation of the ADB’s own safeguard requirements on involuntary resettlement and indigenous peoples has resulted in this road building project being classified as category B. This despite the ADB itself noting “impacts on a high percentage of ethnic minorities including the Dayak and Banjar peoples in North Kalimantan, are expected. Land acquisition for the project may affect the ancestral territories of ethnic groups in the project area and result in their economic displacement”. A project is classified as Category A is it if it is likely to have “significant adverse impacts that are irreversible diverse or unprecedented”.

Dayak Indigenous Peoples are demanding for their rights to be respected and safeguarded in local and national legislation and regulations prior to any future developments on their ancestral territories.

The loan should be delayed to allow the project preparation to be carried out in conformity with the ADB safeguard policies. ADB’s background study on Indigenous Peoples should be framed by reference to Indonesia’s international legal obligations, including indigenous Peoples right to free prior and informed consent.

The views of impacted indigenous peoples must be incorporated in the scoping study and their inclusion should not be limited to land acquisition.

If studies revealed that the human rights impacts on Indigenous Peoples will be severe, the project should be canceled.

I have already submitted a number of background resources which will provide more detail and necessary background for my comments this morning.