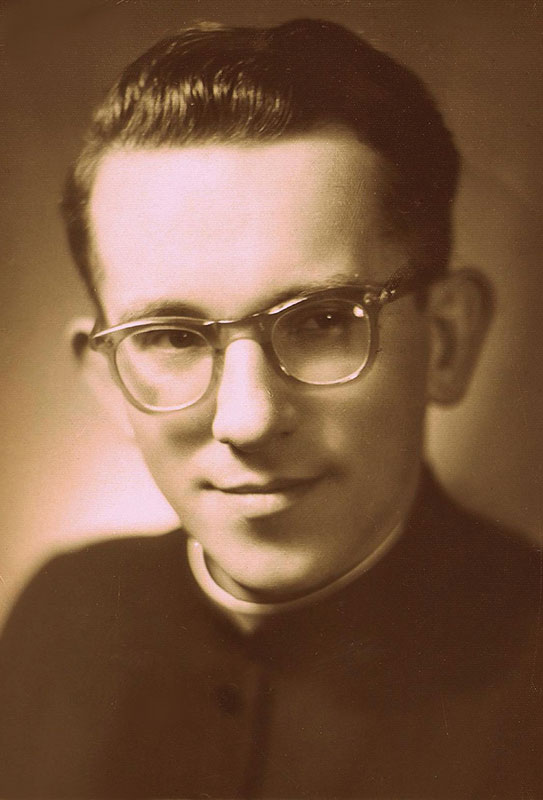 Recently, Archbishop Stanisław Gądecki, the Archbishop of Poznań, Poland, has officially accepted the request of the Provincial of Poland, Father Paweł Zając OMI, to open a new Cause of Beatification and Canonization: that of the Oblate Scholastic Alfons Mańka (1917-1941) . The archbishop also set as the day and date of the first session of the Ecclesiastical Tribunal of the Archdiocese of Poznań: next November 27 in the Oblate parish church of Christ the King in the territory of the Provincial House of the Oblates in Poznań ( in Ostatnia street, 14). Thus, the Congregation and the Church have a new Servant of God: the scholastic Alfons Mańka. Thus, he became the fourth Polish Oblate in the process of beatification and canonization (after Venerable Antoni Kowalczyk, Blessed Joseph Cebula and the Servant of God Ludwik Wrodarczyk). In fact, during the process of beatification of Father José Cebula it was already considered to include the scholastic Mańka in the same Cause. However, with the need to make a quick decision, in the end it was decided to leave Father Cebula as the sole representative of the Oblates in that great common Cause of the 108 Polish martyrs during the Second World War who were beatified in 1999.

The great interest and devotion to him maintained in the parish of his native town and the documents preserved by the Alfons family, including a spiritual diary of the Servant of God during his novitiate, have made many people feel attracted to Alfons Mańka in recent years. After some steps, finally the Provincial of Poland asked the Superior General for permission to officially request the Church to initiate the Cause of Beatification and Canonization of Mańka. After hearing the opinion of the Postulator, Father Louis Lougen granted the permission on June 12, 2019. Since then, work has been done to receive the necessary permits from the Church not only to open the Cause, but also to do so. , not in Austria, where Alfons died, and where, therefore, it would have been appropriate to do the diocesan trial, but in Poznań since a large part of the documents and the main witnesses are in Poland.

Scholastic Alfons Mańka died on January 22, 1941 as a result of the brutal treatment received in the Nazi concentration camp of Mauthausen-Gusen (Austria).

Thanks to the enormous work of the Vice-Postulator for this Cause, Father Lucjan Osiecki OMI, and his collaborators, in a few days we will have the first session of the court in which the different officials who will intervene during the Process will take the oaths that canon law requires. to be able to act on behalf of the Church in this investigation.

Scholastic Alfons Mańka died on January 22, 1941 as a result of the brutal treatment received in the Nazi concentration camp of Mauthausen-Gusen (Austria) during the violent Nazi persecution against the Catholic Church in general, and against the Polish clergy in particular. through mass deportations of priests, religious and seminarians to concentration camps. Many other Oblates died in this persecution, one of whom, as stated, has already been beatified: Father José Cebula.

During the process, all civil and ecclesiastical archives will be searched for new documents that may shed light on the investigation. Testimonies will also be collected from people whose statement may be important to the Cause. Another objective will be to verify the existence of the common opinion that Alfons Mańka died as a true Christian martyr and also the widespread reputation that people experience the intercession of the Servant of God when they pray to him.

In the coming days, especially around November 27, the date of the first court session, new materials will appear both on the Congregation’s official website and its social networks linked, in the digital media of the Postulation (https://www.facebook.com/PostulatioOMI ) and on the official page of the Cause of Mańka ( https://manka.oblaci.pl/ ) and of the Oblates of Poland (https://oblaci.pl/).

The Oblates of the Province of Poland have already prepared devotional materials in relation to the figure of Alfons Mańka, pictures and also other prayers, such as a Stations of the Cross with meditations of the Servant of God, which will be translated into other languages.

It is important to extend the knowledge and devotion to the Servant of God Alfons Mańka, as well as the other Servants of God, Venerables and Blesseds of the Congregation so that everyone can reach the Canonization. Most of these Causes all they need for the Beatification or Canonization is to present the documents that prove a miracle obtained through their intercession.