Fr. Sal poses with his retreatents

The small but vibrant Hispanic community in Mattoon, Illinois experienced a day retreat in Spanish preached by Fr. Salvador Gonzalez, OMI, Director of King’s House Retreat Center in Belleville, Illinois. The community in Mattoon is made up of people from Mexico, Guatemala, and Puerto Rico. The group that gathered for the retreat was diverse in country of origin and in ages. Participants varied from retired people to a nice number of high school age students. Fr. John Titus, from the Diocese of Springfield, is the Pastor of Immaculate Conception Parish which hosted the retreat. Fr. John does not speak Spanish and out of love and concern for his congregation, he reached out to the Oblates in Belleville to have an Oblate go to his parish and offer a day of retreat in Spanish. 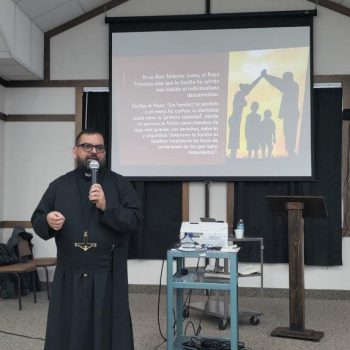 The theme of the retreat was “Lazaro, Sal Fuera!” (Lazarus, Come Forth!) and the day included talks, personal and group sharing, a Holy Hour for vocations, opportunity for confessions and concluded with Mass.

One of the fruits of the retreat is that the young people who attended the retreat decided and announced to the community that they are committing themselves to start and support a youth group that will give young people a space to grow in their faith. The group will also come down to Belleville to visit the National Shrine of Our Lady of the Snows during the upcoming Way of Lights.