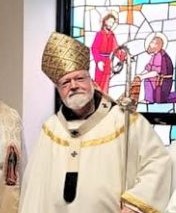 Boston’s Cardinal Sean O’Malley, OFM Cap, has been a long time friend of the Oblates.  His recent ground-breaking ministry with the Greek Orthodox Church reminds us of the role of all the Eastern Churches in eastern Massachusetts.

During the 1970’s, O’Malley headed up Hispanic and Portuguese ministry for the Archdiocese of Washington, DC.  Scholastics such as Louie Lougen, now our superior general, and Terry O’Connell came in contact with him as they learned those languages. When O’Malley became archbishop of Boston in 2003, Fathers Jim Flavin and John Hanley worked closely with him.  During the Year of St. Joseph, O’Malley visited the Shrine of St. Joseph staffed by the Oblates in Lowell, MA. (See article from O’Malley’s visit to Shrine of St. Joseph here)

The archdiocesan newspaper, The Boston Pilot, described O’Malley’s outreach to the Greek Orthodox Metropolitan Methodios, for the feast of St. Andrew, Nov. 30. The Metropolitan invited O’Malley to attend the feast day liturgy at the Greek Orthodox Cathedral of the Annunciation, and O’Malley quickly accepted, attending part of the liturgy and then addressing the assembled clergy.

“Since 1996, the Roman Catholic Archdiocese of Boston and the Greek Orthodox Metropolis of Boston have exchanged delegates to participate in celebrating  the feast days of their Churches’ respective patrons–St. Peter, patron of Rome, and St. Andrew, patron of Constantinople This practice mirrors the Holy Father and Ecumenical Patriarch’s practice of exchanging delegates or messages on those occasions on the international level, which began in 1979. . . . However, in past years, the Catholic delegates had only been present for the vigil of St. Andrew’s feast day at the Metropolis’ chapel in Brookline.  This was the first time they attended the main liturgy at the cathedral.”

In his remarks to the clergy following the liturgy, O’Malley said that the U.S. Conference of Catholic Bishops was “very excited and very happy” when, for the first time, Orthodox bishops joined them at their plenary session in Baltimore two weeks earlier.  Looking forward to the year 2054, a thousand years since the Great Schism, he asked “wouldn’t it be wonderful if that division healed before then?”

For Oblates ministering in the area between Tewksbury and Boston, it is intriguing to discover that there are more Eastern Church members here than Protestants.  In Lowell alone, there are three Greek Orthodox Churches.  And in Newton, the Melkite Church (which accepts the role of the pope) is very prominent.

May we join with O’Malley in praying and working with the Holy Spirit so that our sad divisions will cease and we can minister as a united Christian community with many enriching differences.