For the fifth time, representatives of three religions in the city of Poznań in Poland created a common calendar for the year 2022. The Missionary Oblates played a key role in actualizing this project.

“Christians, Jews and Muslims Together” is a publication unique in the scale of the country, the aim of which is to get to know each other better between people of different faiths and cultures. A presentation of the calendar took place at the Provincial House of the Missionaries Oblates in Poznań.

“Poznań is an open city, where there is room for everyone, regardless of socio-political views, nationality or religion” said Jędrzej Solarski, Deputy Mayor of Poznań. “The inhabitants of the capital of Greater Poland support each other in particular in times of a pandemic. We can see this solidarity especially at the beginning of winter. I hope that the calendar will be – as in previous years – an impulse to better understand the cultural and religious diversity of the inhabitants of Poznań, as well as a reminder of the values that unite us” he added.

“Christians, Jews, Muslims together” is the result of a series of meetings between Youssef Chadid, imam of the local Muslim community, representative of the Jewish community in Poznań, and Fr. Marcin Wrzos, OMI. It is a unique publication, the purpose of which is to show the diversity and possibilities of peaceful life of followers of different religions side by side.

“In Poznań, a dialogue between Abrahamic religions has been going on for years. Every year, it gets expanded in small steps, even with the help of other Christian denominations. We are also supported by the teeachings of Pope Francis”, emphasized Fr. Marcin Wrzos, co-founder and coordinator of the project. 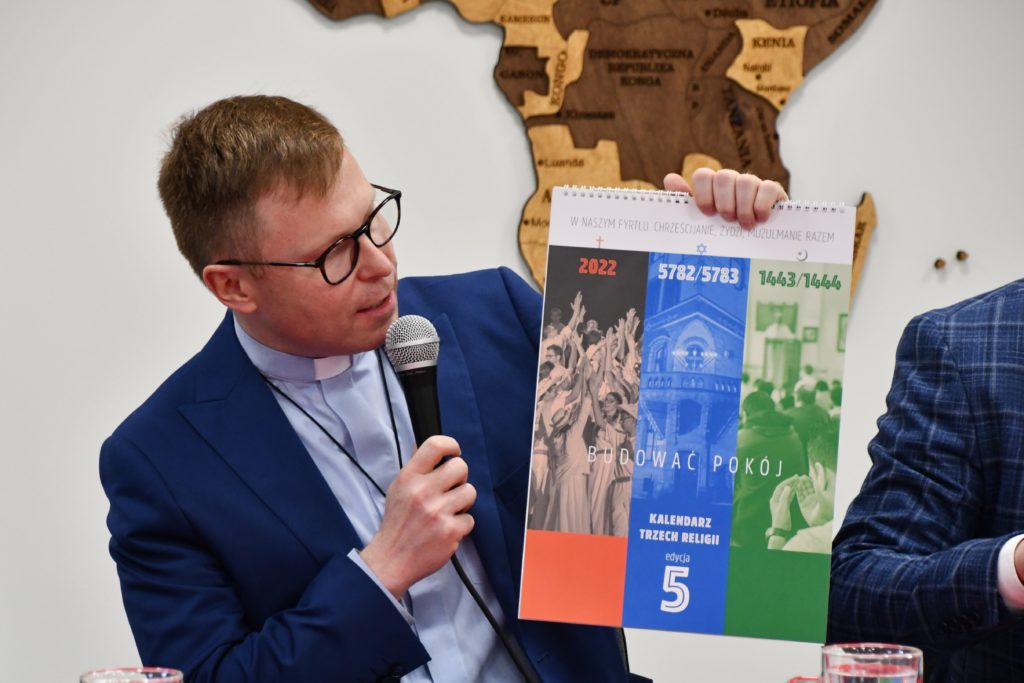 This year’s calendar has been called “Building Peace. Five years together“. The slogan refers to the number of editions and at the same time announces the leitmotif of the publication.

In addition to the Gregorian calendar, we also find in it a Muslim calendar, dated from the Prophet Muhammad’s journey from Mecca to Medina, and a Jewish one, counted from the beginning of the world. The publication contains the most important holidays of the three religions, lists the days of prayer – Sunday, Sabbath, assembly day – and the names of each month. In the part concerning Christians, there are holidays not only for Catholics, but also for Orthodox Christians, and Protestants. There are also distinguished dates of Polish national holidays and other important days, like Children’s Day, Mother’s Day or Father’s Day.

The calendar is richly illustrated. The individual cards contain photos related to Poznań, explanations of the traditions, rites and prayers of each religion. This year, the calendar also has an introduction in English, making it available to a wider audience.

“I am grateful to the city authorities for cultivating the idea of multiculturalism and religious values that contribute to our society”, said Alicja Bromberger-Kobus, president of the Jewish Community in Poznań. “ I wish you all the pleasure of using the unique Calendar of the Three Religions”, he added.