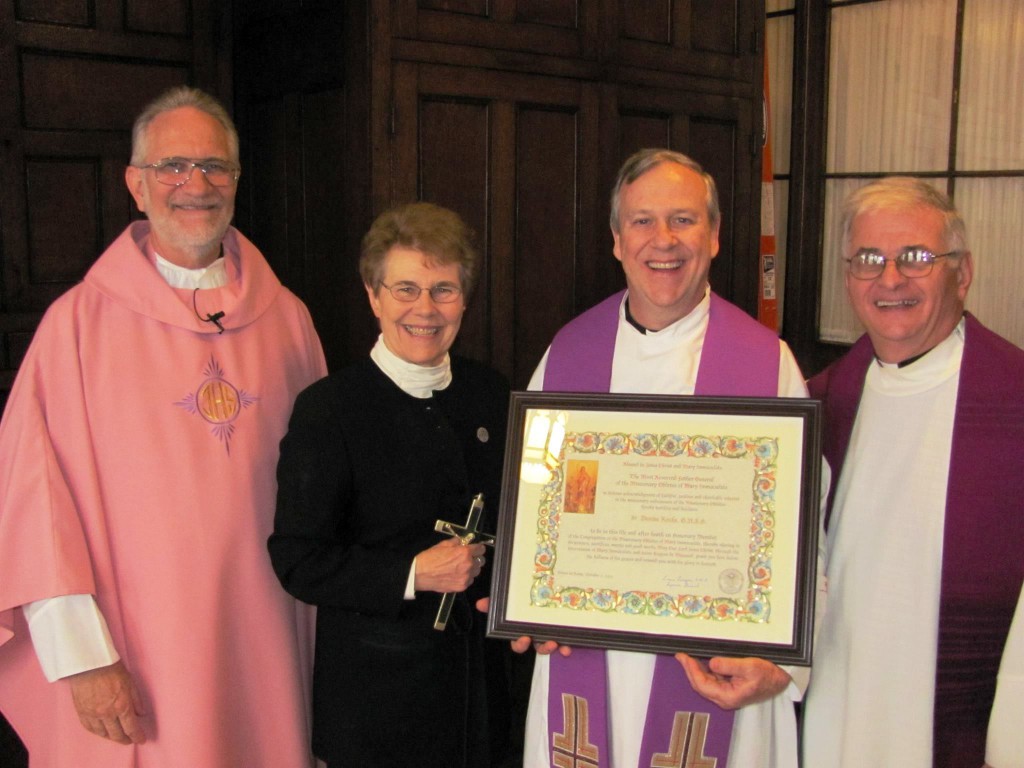 December 13, 2015, Sr. Denise A. Roche, Grey Nun of the Sacred Heart, and President of D’Youville College (where the Pre-Novices study) was named an Honorary Oblate of Mary Immaculate by Fr. Louis Lougen, OMI, Superior General of the Oblates. 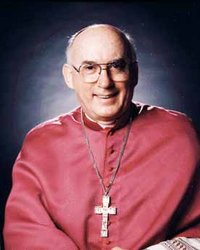 Archbishop Emeritus Harry J. Flynn was installed as an Honorary Oblate in the United States Province of the Missionary Oblates of Mary Immaculate October 30, 2011. His service was held at Christ the King Retreat Center in Buffalo, MN. The U.S. Provincial Fr. William Antone, OMI, presided.

The honor was bestowed upon Archbishop Flynn, retired archbishop of the Archdiocese of St. Paul and Minneapolis, by the Oblates in response to his exceptional commitment to the Missionary Oblates for several years.

Archbishop Flynn previously served as the Coadjutor Archbishop of the Archdiocese of St. Paul Minnesota in 1994 under the leadership of Archbishop John Roach. In 1995, he succeeded Archbishop Roach.

Father Jim Deegan, OMI has worked with Archbishop Flynn at the Christ the King Retreat Center in Buffalo, MN many times in the past. He can still recall the impression Archbishop Flynn left on him and the Oblate community shortly after being named Archbishop.

“I’ll never forget one Sunday evening; he invited all the Oblates to get to know us. He was so open, hospitable, and generous and wanted to know who we were. That really got the ball rolling in a good direction (for Archbishop Flynn).”

Father Deegan met him a year before his succession as archbishop, but he said he became more familiar with Archbishop Flynn’s charism in the summer of 1997. He encouraged the expansion of retreats and even provided donor contacts for fundraising, something that was not normally offered.

Archbishop Flynn has since held several retreats at Christ the King Retreat Center and has been heavily involved in the Oblate Partnership. Fr. Deegan said that he has demonstrated what he believes an Oblate should be.

“He has the heart of an Oblate. He’s close to the people and he has a deep concern for the poor.”

Honorary Oblates are proposed to the Superior General by a provincial superior, who provides written recommendations and evidence of the person’s personal identification with the ideals and goals of the congregation.

Fr. Deegan said that the personal characteristics he has seen in Archbishop Flynn are what stand out the most.

“He’s very personable. There’s an oblate trait called “close to the people” that distinguishes the Oblates and that same trait is very true of Bishop Flynn. He is very pastoral. The biblical image I would use is ‘good shepherd.’ He’s close to the people, he cares for everyone and is available to everyone.”

On Sept. 11 Fr. Wilhelm Steckling formally invested Bishop Thomas J. Flanagan as an Honorary Oblate of Mary Immaculate during a Mass in the Oblate School of Theology’s chapel. Fr. Warren Brown, OMI, presented the recommendation for the honor, saying, “Today, we present Bishop Tom Flanagan, a compassionate, big-hearted, loving priest of God, whom we honor as a son of St. Eugene and a brother in Oblate community life.” 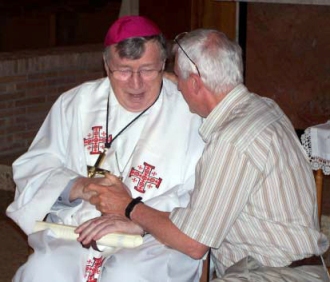 Bishop Flanagan was presented with the Oblate cross of the late Fr. Angel Villalba. Born in Spain, Fr. Villalba served as a missionary in Africa and spent more than 20 years in ministry in Corpus Christi, TX. He died in 2008.

A native of Ireland, the bishop was ordained for the diocese of San Antonio in June 1956. In 1979 he graduated from Oblate School of Theology with a master of divinity degree for clergy. After 42 years of serving in various parishes, he was named auxiliary bishop to assist Archbishop Patrick Flores by Pope John Paul II in 1998. He retired in December 2005. In his presentation, Fr. Brown spoke of the bishop’s devotion to the Blessed Virgin, his membership in the Oblate Madonna Residence since becoming bishop as well as his commitment to apostolic community life as a basis for mission to the needs of God’s people. “Many Oblates have been anointed and ordained by his priestly hands,” Fr. Brown noted. “He has celebrated the Mass of Christian Burial for many Oblates and has become a friend, brother, confessor and fellow minister of the Gospel.”